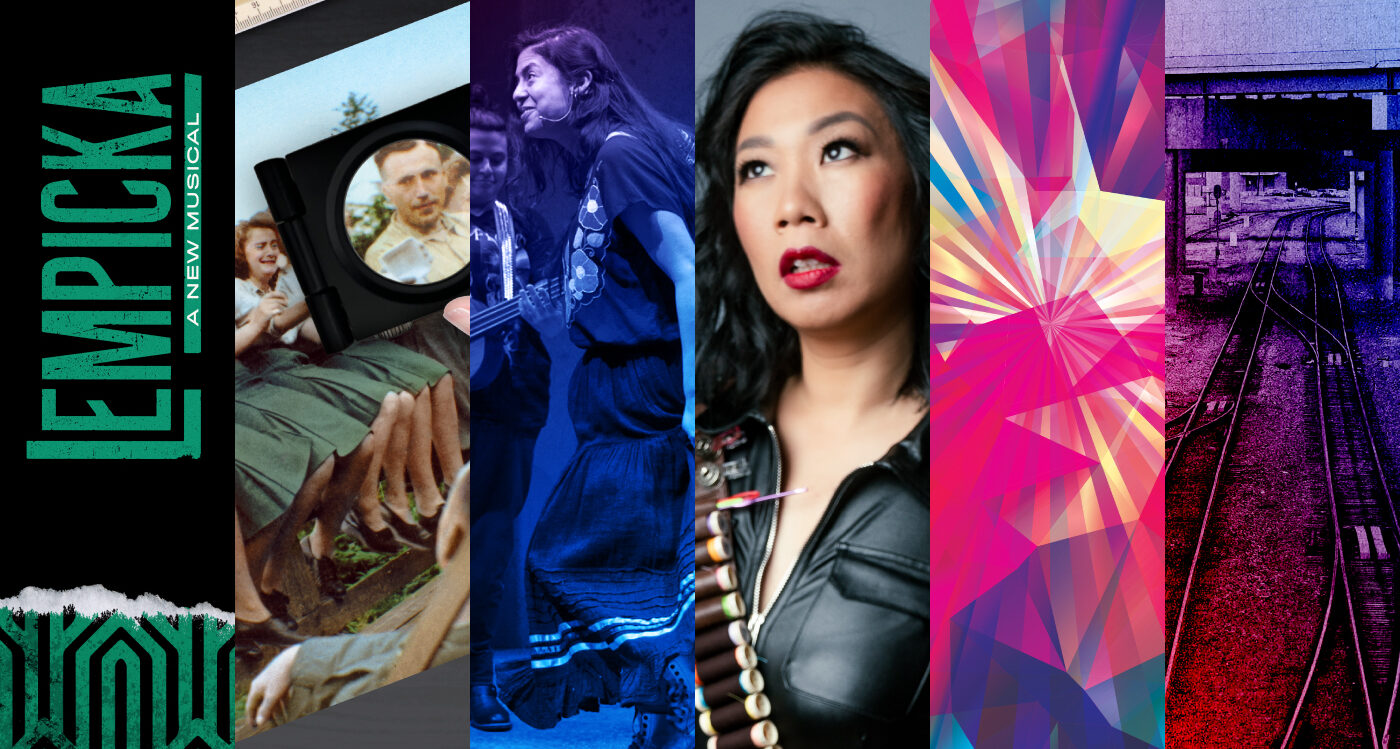 Amid the political upheaval of the early 20th Century, a young painter named Tamara de Lempicka and her aristocrat husband are forced to abandon their luxurious lifestyle in St. Petersburg and flee to the dubious safety of Paris. Relying on raw talent and relentless ambition, Tamara claws her way from penniless refugee to in-demand portraitist, earning a place among Parisian high society. Her world is upended once again when she meets Rafaela, a free spirit from the city slums, who introduces Tamara to a new world of decadence and passion. Torn between her new muse and her husband, and fighting to leave her mark on an ever-changing world, Tamara must discover the depths of her own strength to survive. Spanning decades of political turmoil and told through a thrilling, pop-infused score, Lempicka boldly explores the contradictions of a world in crisis, a woman ahead of her era, and an artist whose time has finally come.

Here There Are Blueberries

An album of never-before-seen World War II-era photographs arrives at the desk of United States Holocaust Memorial Museum archivist Rebecca Erbelding. As Rebecca and her team of historians begin to unravel the shocking story behind the images, the album soon makes headlines around the world. In Germany, a businessman sees the album online and recognizes his own grandfather in the photos. He begins a journey of discovery that will take him into the lives of other Nazi descendants — in a reckoning of his family’s past and his country’s history. Here There Are Blueberries tells the story of these photographs, and what they reveal about the Holocaust and our own humanity.

The En Garde Arts Production of
Fandango for Butterflies (and Coyotes)

Fandangos are vibrant gatherings in which music and dance bring stories of a community to life. For a group of immigrants gathering in a community center on the eve of a city-wide ICE raid, this night’s fandango serves a vital purpose: to resurrect the culture they left behind. Inspired by interviews with immigrants from Latin America – many of whom made a dangerous journey to the United States – Fandango for Butterflies (and Coyotes) is a celebration of the resiliency and camaraderie that can be built as strangers become friends, friends become family, and the music plays on. This “rapturous” and “riveting“ new play is a “sensitive portrait of the in-between: characters balancing the small joys of everyday life with the fear of uncertainty” (The New York Times).

Written and Performed by Kristina Wong
Directed by Chay Yew

On Day 3 of the COVID-19 pandemic, Kristina Wong began sewing masks out of old bedsheets and bra straps on her Hello Kitty sewing machine. Before long, she was leading the Auntie Sewing Squad, a work-from-home sweatshop of hundreds of volunteers—including children and her own mother—to fix the U.S. public healthcare system while in quarantine. It was a feminist care utopia forming in the midst of crisis. Or was it a mutual aid doomsday cult? With hilarity and boundless generosity, she invites the audience in on her work building community in isolation, while reflecting on what we’d been through and imagining what we wanted to become.

The original rom com, wild with love and high on joy

In Shakespeare’s classic romantic comedy, Rosalind and Orlando meet by chance in court and have an immediate connection. When they are both banished, fate brings them together again in the Forest of Arden. Far from the restrictions of court life, we find ourselves in a vibrant new world, where identities can be fully explored and romance can blossom in multiple forms.

Brought to vibrant life by a cast of trans, non-binary and Queer performers, Christopher Ashley and Will Davis’s re-imagined As You Like It is a celebration of the limitless possibilities of love and humanity.

This bold and beautiful production inhabits a wonderful, ‘gender-ful’ world – a sensuous place that embraces the full spectrum of gender possibilities. Evoking the heady experience of falling in love, and underscored by heart-thumping live music, there are no boundaries in As You Like It, just endless complexities, infinite love and the joyful expression of true selves. Love is in the air!

The story that defined an era is reimagined in a groundbreaking musical for a new generation. In 1967 Tulsa, Oklahoma, the hardened hearts, aching souls and romantic dreams of Ponyboy Curtis, Johnny Cade and their band of greasers take center stage in a fight for survival and a quest for purpose. Adapted from S.E. Hinton’s seminal book and Francis Ford Coppola’s iconic film, The Outsiders features a book by Adam Rapp, music and lyrics by Jamestown Revival (Jonathan Clay and Zach Chance) and Justin Levine, music supervision, arrangements & orchestrations by Justin Levine, choreography by Rick Kuperman and Jeff Kuperman; directed by Danya Taymor.

All artists and programs subject to change.