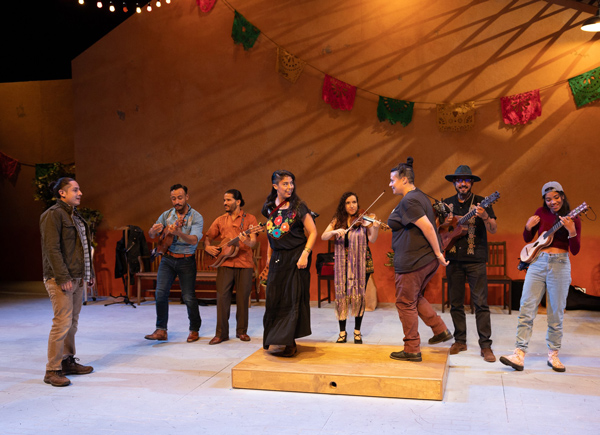 Review: FANDANGO FOR BUTTERFLIES (AND COYOTES) brings hope and heartache to the La Jolla Playhouse

FANDANGO FOR BUTTERFLIES (AND COYOTES), inspired by real-life stories brings empathy, hope, and heartache to the La Jolla Playhouse stage through September 25th.

The show opens at the start of a gathering at a sanctuary located in Chula Vista (originally New York where the piece was created). The event brings characters from various backgrounds and experiences together to celebrate and support each other. As the show progresses the festivities of this fandango bring people’s stories to life through music and dance.

Everyone at this fandango is an immigrant, and all have been transformed by how that experience (legal or not) has shaped lives. Mariposa (Jen Anaya) is the main coordinator of the fandango and she works at a deli to support her mother back home. She has been in the US for 18 years and has formed a friendship and a potential romantic bond with Rogelio (Carlo Albán) who is from Honduras.

Rogelio and his cousin Elvin (Danny Ray Caraballo) both work at a stable and are anxiously awaiting news from their cousin Johan (Roberto Tolentino) who is fleeing to the states because life in his native town has proven too dangerous to stay.

Pili (Frances Ines Rodriguez) is a legal immigrant who brings a lot of humor, and music to the proceedings. Her openness allows Rafaela (Silvia Dionicio), a first-timer to the fandango who is also a legal immigrant to relax and share the family dynamics that shaped her childhood.

This talented ensemble brings their joys, challenges, and sadness vibrantly to life through acting, singing, and dancing. The show is funny and heartfelt, and the Spanish language folk numbers are lovely, as is a sequence portraying the journeys of crossing the border.

The bilingual En Garde Arts production, playing through Sept. 25, will be followed by a series of free performance countywide 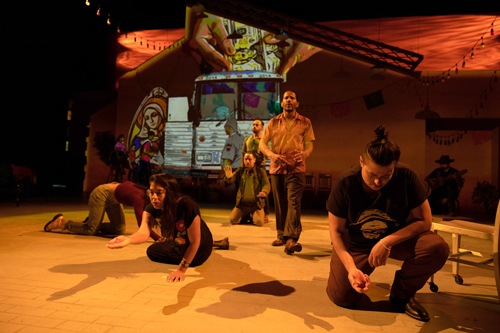 In Andrea Thome and Sinuhé Padilla’s play with music “Fandango for Butterflies (and Coyotes),” there’s a song lyric that goes: “You left because of trouble. Now the trouble is your life.”

That’s a common theme in the lives of the immigrant characters who gather at a fandango party to share and sing stories of how they came to the United States and the challenges they’ve faced in the years since. Each has struggled to make a life here and maintain connections with those they left behind, but living divided lives has left deep scars.

La Jolla Playhouse is presenting the West Coast premiere of En Garde Arts’ 2020 production of “Fandango.” Playwright Thome originally set the play in New York, but for this run it has been re-set at a “sanctuary” church in San Diego and references to Barrio Logan and Chula Vista are sprinkled into the script. That’s problematic, though, since the frequent immigrant raids the “Fandango” characters dread don’t happen here, and the dynamics of living here on the U.S.-Baja border are different from the displacement immigrants experience living thousands of miles away in New York.

‘Fandango for Butterflies (and Coyotes)’ at La Jolla Playhouse

The new play, written by playwright Andrea Thome with music composed by Sinuhé Padilla, is set in a community “fandango.” The term means a specific dance, but it’s also a joyous gathering and celebration with storytelling, music and dance that’s common to Latin American immigrant communities. In the play, this particular fandango is just before Immigration and Customs Enforcement (ICE) raids take over the city.

Following the bilingual and interactive play’s run in La Jolla, it will tour community centers countywide for free performances 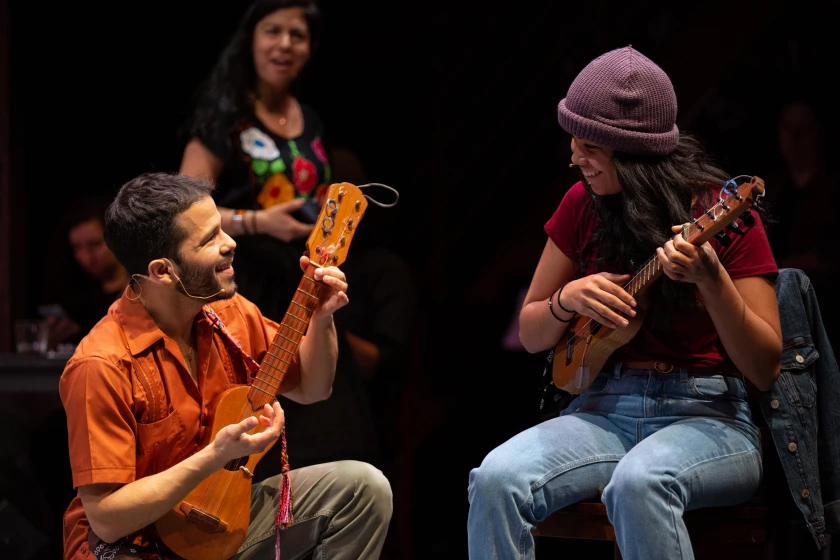 Thanks to San Diego’s proximity to an international border, many of its local theaters have produced plays and musicals over the years about the immigrant experience.

But playwright Andrea Thome said that too many of the immigrant stories she has seen portrayed in the American media focus on their suffering and struggle. Her play “Fandango for Butterflies (and Coyotes),” which opens Tuesday in its West Coast premiere at La Jolla Playhouse, instead celebrates the strength, resilience and imagination of immigrants who come together one night for a fandango celebration at a New York community center.

Thome, whose parents are Chilean and Costa Rican-American, said immigrants do suffer in their journeys to America as well as their assimilation process, but that’s just one piece of who they are. And fandangos — joyful multicultural gatherings of improvised song, dance and storytelling — celebrate immigrants’ bravery, triumph against the odds and their shared experience.

“I see immigration as a radicalization of imagination,” Thome said in a recent interview. “You have to imagine your life in a place you’ve never been, and you have to draw on that store of imagination to get you through what can be a very difficult journey for some people. Fandangos celebrate that imagination, creativity, community and solidarity.”

How to Deal With the Anxieties of Immigration? Break Into Song

The actors and musicians behind “Fandango for Butterflies (and Coyotes)” see themselves in the stories they will share, and sing about, onstage. 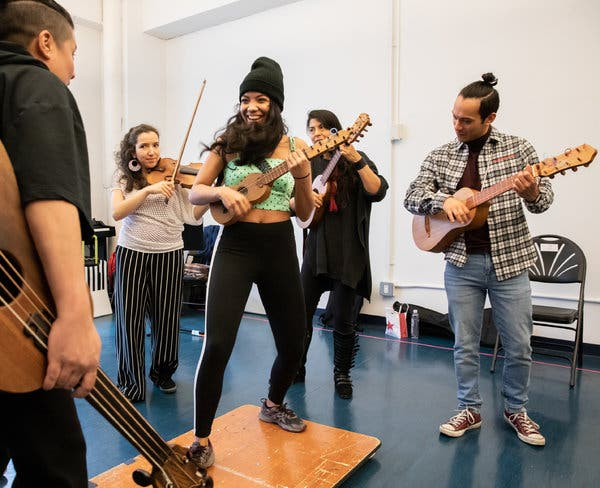 Snow flurries swirled against the window, but the atmosphere inside a Manhattan rehearsal room on a recent Saturday afternoon was comparatively balmy, warmed by the insistent triple meter of son jarocho, folk music from the Gulf of Mexico. Six actors, led by Sinuhé Padilla, a musician who specializes in the style, were working through a climactic moment in “Fandango for Butterflies (and Coyotes),” a new play about immigration by Andrea Thome that will be produced at venues in all five New York City boroughs, starting at La MaMa on Feb. 6.

As the performers strummed lean Mexican mini-guitars called jaranas and stomped their feet on a flattened rehearsal table (a stand-in for the bespoke tarima that will be used in performances), they also reached some dramatic epiphanies.

This was the moment in the play when their characters, all of them immigrants with varying degrees of documentation, cut loose after a night of shared anxieties and hopes — about intermittent contact with far-flung family members, about the looming threat of raids by Immigrations and Customs Enforcement (ICE), about simply making it through another day in a nation that seems increasingly hostile to their presence.

Read at The New York Times