» Let us know you are coming!

A FREE outdoor theatre, music and immersive art event for all ages.

La Jolla Playhouse’s hit site-inspired and immersive theatre series, Without Walls (WOW) is making an impromptu drop in appearance, for one weekend only, at ARTS DISTRICT Liberty Station August 14 and 15th. This special event features newly-commissioned pieces from San Diego artists that will delight and entertain. The shows when the bubble bursts, Get on Board and Can We Now? will take place as an integrated experience at the times listed above on the North Promenade. The immersive experience OPTIKA PIÑATA is an all-ages event offering ongoing performances every 7 minutes from 2pm to 4:30pm and from 6pm to 7:30pm on Saturday; and from 1pm to 3pm and 4pm to 6pm on Sunday.

Grab your blanket, lawn chairs and head down to POP UP WOW for a summer celebration of theatre, music and being together! 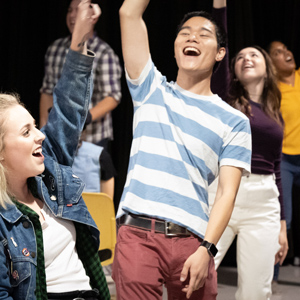 when the bubble bursts

Inspired by the words and reflections about this unique moment from local artists and community members, when the bubble bursts is a meditation on human connection and impermanence. Simultaneously a celebration of resilience and a reflection of adversity, this performance blends music, movement, and text to reignite the magic of live theater. Featuring a cast of 20 performers, some larger-than-life guests, and bubbles galore, this ‘happening’ explores some of the difficult questions posed by the past year while evoking the childlike wonder and curiosity conjured by life’s simplest joys. 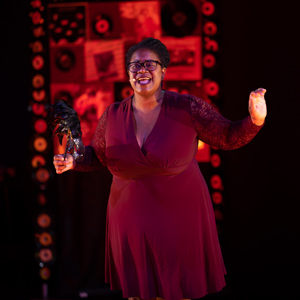 Get on Board is a journey through the evolution of Black music. Through that journey, we are exploring the cultural traditions that Black folks carry through music and how these traditions educate and encourage future generations through their own tribulations. For Pop-Up WOW, we are inviting everyone to the cookout and creating a unique immersive experience for the audience with a few surprises. Same cast, similar flavor, live and in color. 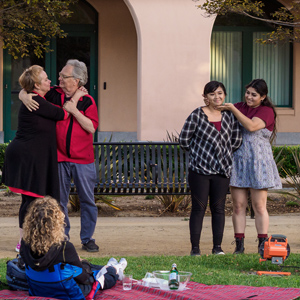 Can We Now? is a celebratory dance theatre piece that takes a playful look at how we are cautiously, clumsily and joyfully coming out of isolation into community with one another. This happening celebrates the collective and features live music, lots of laughter, and a dance flashmob featuring you! 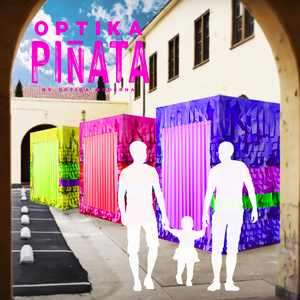 Presented in partnership with The New Children’s Museum

The mysterious OPTIKA opticians need your help! Four colorful pop-up offices have arrived at Liberty Station. Our opticians invite kids and grown ups alike to participate in a fantastical VISION exercise unlike any other. Through this, kids of all ages will see themselves through a new lens as they discover the legend of a mythic, interdimensional caravan theater known as TEATRO PIÑATA. Those who complete the assessment will receive a custom certificate and a mysterious parcel with further instructions. What you do with its contents may forever change the fate of TEATRO PIÑATA and yours as well.

Patron Notes
**Performances are outdoors. Lawn chairs and blankets recommended to sit comfortably on the lawn at the North Promenade. Hats, sunscreen recommended on sunny days.

**Run time for the shows on the North Promenade is approximately 80 minutes for all three. Optika Pinata is an individual experience for groups of 1-4 that runs approximately 7 minutes each. 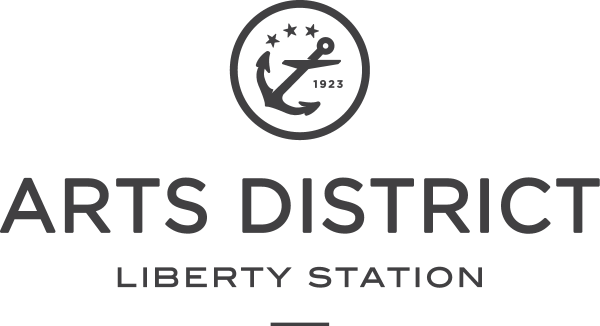 Let us know you are coming!

Blindspot Collective develops radically inclusive programming that cultivates new work, emerging artists, and diverse audiences. The company develops transformative theatre that amplifies marginalized voices, illuminates untold stories, and energizes vulnerable communities in San Diego County. Since its founding in 2017, Blindspot Collective has collaborated with La Jolla Playhouse; The Old Globe; California Center for the Arts, Escondido; Diversionary Theatre; ARTS (A Reason to Survive); UC San Diego and other community partners to develop projects that meaningfully engage audiences and artists in the blindspot of society. The organization centers equity, inclusion, and pressing social issues in its work on and off stage with collaborators that include San Diego Unified School District, Juvenile Court and Community Schools, Cajon Valley Union School District, and Live Well San Diego. Most recently, Blindspot Collective was the first theatre company to be awarded a performing arts residency at the San Diego International Airport, where the organization developed and presented site-specific performances in 2019. The company has received acclaim for its original work, including Hall Pass, an immersive musical featured in the 2019 Without Walls Festival; Qulili, a documentary play based on the stories of local refugees developed with support from the Critical Refugee Studies Collective; The Magic in this Soul, a verbatim play about discrimination and resilience that won the Audience Favorite Award at the 2018 San Diego International Fringe Festival; and Untold, another verbatim play about mental illness that won the Dunn-Rankin Award for New Work at the 2017 San Diego Fringe. The company also develops interactive Forum Theatre for youth audiences, including Safa’s Story and Danny’s Story, which allow young people to consider the complexities of difference and prejudice. Those two productions have been seen by over 12,000 students in the past two years.

Jesca Prudencio is a director, choreographer and community-based artist. She is dedicated to developing new theatrical works that humanize issues and explore the tension between cultures. She focuses on new plays, musicals, film and dance theater in New York, regionally, and internationally. Jesca has developed new work at The Kennedy Center, La Jolla Playhouse, East West Players, The Lark, NAMT, Ensemble Studio Theatre, Space on Ryder Farm, La MaMa, Clubbed Thumb, Joe’s Pub and The Movement Theatre Company. She is the recipient of the TS Eliot US/UK Exchange at the Old Vic, The Drama League Fall Fellowship, and the 2018 Artist-In-Residency at the Performance Project at University Settlement in Manhattan. Jesca is the inaugural recipient of The Julie Taymor World Theater Fellowship which supported her travels through Thailand, Japan and The Philippines throughout 2017 as she researched and trained in traditional and contemporary forms of theater in each country. She was recently named a 2021 Woman To Watch on Broadway by the Broadway Women’s Fund. She founded her company People Of Interest in 2014 to focus on new theatrical events that address community specific issues. Most recently, they presented PDA as part of the 2019 La Jolla Playhouse WOW Festival, exploring the relationships of three real couples and how they love out loud. As an educator, Jesca has taught workshops at numerous institutions across the U.S. and Asia. She was the former Education Director at Ping Chong + Company, where she worked as a writer, director, and associate on a dozen interdisciplinary and documentary theater projects across the U.S., including Oregon Shakespeare Festival, BAM and The Smithsonian. Currently the Head of Directing at San Diego State University, she holds a BFA in Drama from NYU Tisch, and an MFA in Directing from UC San Diego.

Kenny Ramos is a theatre artist from the Barona Band of Mission Indians/ Kumeyaay Nation. He grew up on the Barona Indian Reservation and started his theater career locally at the Starlight Bowl and Moonlight Amphitheatre before moving to Los Angeles to attend UCLA, where he earned a degree in American Indian Studies. Kenny is an ensemble member at Cornerstone Theater Company where he is collaborating on a series of community-engaged theater productions that center various tribal nations and communities across the United States. He is a recipient of First Peoples Fund’s Cultural Capital Fellowship, TCG’s Fox Foundation Resident Actor Fellowship, and Yale Center for the Study of Race, Indigeneity & Transnational Migration’s 2021 Mellon Arts Practitioner Fellowship. Kenny’s favorite acting credits include the world-premiere productions of Larissa FastHorse’s Urban Rez and Native Nation (Cornerstone), Mary Kathryn Nagle’s Return to Niobrara (Rose Theater Omaha), Vera Starbard’s Devilfish (Perseverance Theatre) and Dillon Chitto’s Bingo Hall (Native Voices at the Autry). He has also performed at Oregon Shakespeare Festival, Denver Center and The Kennedy Center, and he recently received his first play commission from Diversionary Theatre’s Rising Tide Commissioning Program. Kenny is passionate about creating theater that centers Native perspectives, asserts tribal sovereignty, and challenges settler colonial realities of American society.

David I. Reynoso is a scenic/costume designer and the creator, with Optika Moderna, of La Jolla Playhouse’s acclaimed Without Walls Festival productions of Las Quinceañeras (2019) and Waking La Llorona (2017), as well as the 2020 Digital WOW production of Portaleza. Other Playhouse designs include: Queens, At the Old Place, Tiger Style!, Healing Wars, The Darrell Hammond Project and Kingdom City. He is also recognized locally for his designs of The Old Globe’s Ebenezer Scrooge’s Big San Diego Christmas Show, As You Like It, The Tempest, The Wanderers, tokyo fish story, Twelfth Night, Arms and the Man, Water by the Spoonful and Time and the Conways, among others. The Obie Award–winning costume designer of Sleep No More (New York and Shanghai), Mr. Reynoso’s other selected work includes: Hamlet at ACT and Futurity, Cabaret, The Snow Queen, Alice vs. Wonderland at ART. He is the recipient of the Creative Catalyst Grant of The San Diego Foundation, an Elliot Norton Award, a Craig Noel Award nomination and multiple IRNE and BroadwayWorld Award nominations.

In February, 2020, at the invitation of The Old Globe, a group of Black artists gathered to break bread and discuss common interests. In June of that same year, the group formally became The San Diego Black Artist Collective. Although the collective was integral in the formation of local EDI and Anti-Racist policies, the mission of the SDBAC is to act as a resource for the accomplishment of local Black Works. The San Diego Black Artist Collective is a multidisciplinary collective of Artists advocating for Black stories to be seen and heard.