In Kristina Wong’s ‘Sweatshop’ world, buckle up for a wild pandemic ride at La Jolla Playhouse 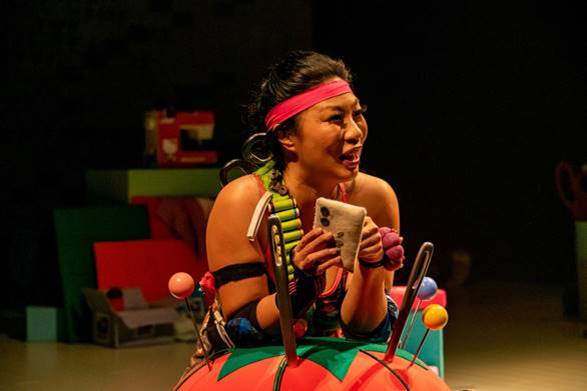 Before her 90-minute comedy even begins, she has quietly taken a seat at center stage behind her Hello Kitty sewing machine, speed-stitching cloth face masks amongst a sea of massively oversized pincushions, bolts of fabric and spools of thread designed by Junghyun Georgia Lee. But within minutes, the Los Angeles actor’s battle against the spread of COVID has mushroomed into an all-out war against self-doubt, racism, medical misinformation, political fascism and her own life choices.

The play, which opened Saturday in its West Coast premiere at La Jolla Playhouse’s Potiker Theatre, was named a finalist for the 2022 Pulitzer Prize for Drama. It chronicles Wong’s pandemic-fueled project, where over 504 days, she created and marshalled a volunteer army of nearly 800 sewing enthusiasts nationwide. Together they sewed and shipped more than 350,000 face masks and distributed several hundred thousand more pieces of personal protection equipment, primarily to marginalized populations in low-income communities, prisons, Indian reservations, homeless encampments and at the border.

Told in chronological fashion in a lively, fast-paced and very funny, audience-interactive production directed by Chay Yew, Wong explains how her mask project got its humble start on March 20, 2020. Out of work and doom-scrolling on Facebook in her Koreatown apartment in Los Angeles, Wong read about hospital workers pleading for face masks and she decided to put her own, not insignificant, sewing skills to work (she sews many of the props used in her shows, including the oversize felt iPad and cellphone in “Sweatshop Overlord”). Then she gradually assembles her troops — which she dubbed the Auntie Sewing Squad, ASS for short — who would grow to include her mom and a generous “auntie” named Sally, who wouldn’t survive the pandemic.

Decked out for war by costume designer Linda Cho, Wong carries face mask-shooting guns and wears a bandolier of thread spools, a giant pair of scissors strapped kitana-style to her back and pincushion armbands. She talks about battling fear, illness and fatigue, discovering her previously untapped wells of empathy and maternal skills, and how she made undercover deals for muscle-soothing CBD pills and ever-elusive elastic for the masks.

In one of the show’s best bits on opening night, Wong asks the audience to donate their excess elastic to the cause and within moments, scrunchies, hairbands and, yes, bras, were sailing through the air toward the stage. Projection designed by Caite Hevner spotlights the many lows of the past two and a half years, including the murder of George Floyd, anti-Asian attacks, anti-mask rallies and the Jan. 6 insurrection, all of which Wong touches on with a mix of seriousness and humor.

Following the arrival of vaccines and cheap masks in stores, ASS disbanded on Sept. 25, 2021, but Wong says this group of selfless aunties — which Wong said is a nice word for old “spinsters” like herself — remain devoted to one another. Early in the play, Wong questions her decision of choosing the solitary life of an artist over starting a family. But through her sewing squad, she ended up with hundreds of new chosen family members.

Listen to the interview

Kristina Wong is not invisible 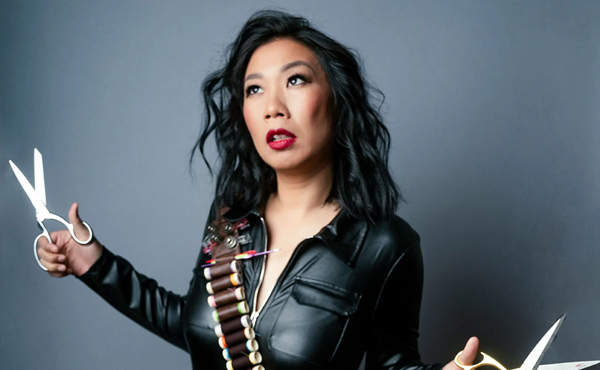 The early days of the COVID-19 lockdowns and quarantines brought total upheaval to life as we knew it. Alongside the tragedy unfolding around us, some of us spent the early days of the pandemic trying our hand at sewing cloth masks. Comedian, playwright, and performer Kristina Wong draws on those times in a new play. Named as a finalist for a Pulitzer Prize in theater, “Kristina Wong, Sweatshop Overlord” is a solo show about the group of individuals Wong assembled across the country to make homemade masks to meet the urgent demand.

Preview performances begin Tuesday, Sept. 20, at La Jolla Playhouse, and it officially opens on Saturday and runs through Oct. 16, 2022. Playwright, comedian and performer Kristina Wong spoke with KPBS Arts producer and editor Julia Dixon Evans, their conversation below had been lightly edited for clarity.

In a funny and candid interview, the Los Angeles resident talks about how her pandemic-born hobby turned into a nationally acclaimed play 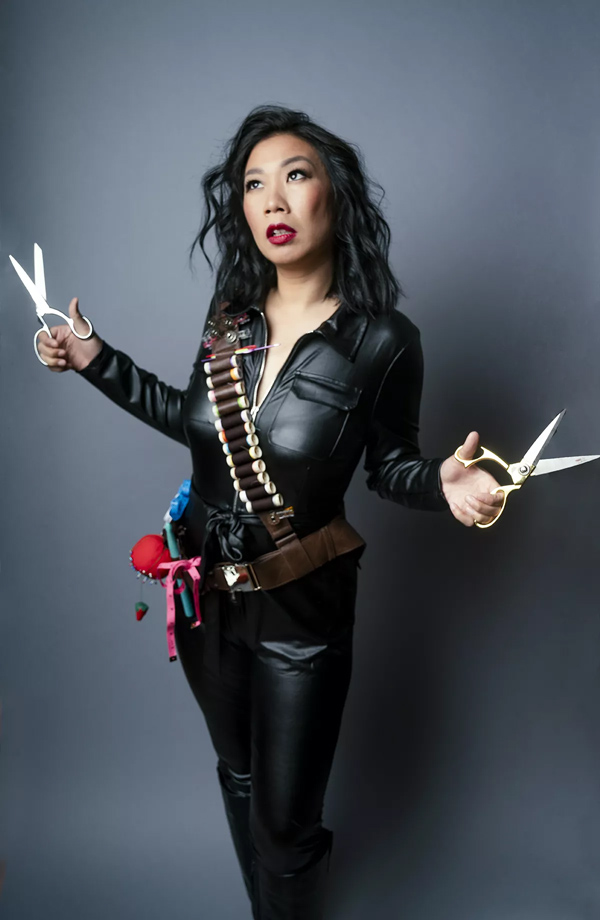 In mid-March 2020, performance artist-playwright Kristina Wong was midway through the second live show of a national tour when all of the students in the college auditorium where she was performing received a simultaneous text that the campus would shut down the next day due to COVID-19.

With the tour canceled and all theaters closed, Wong found herself quarantined in her L.A. Koreatown apartment with nothing to do but watch and read the news about the fast-growing pandemic. Then a friend tagged Wong on a social media post about how local hospitals were in need of face masks and she found a way to become an essential worker.

“The curse of the artist is that when push comes to shove, no one wants to watch your play,” she said. “But I sewed my own set pieces and props and I’d sewn myself a big vagina costume. I never imagined these skills could help anyone.”

So that day, with a few scraps of fabric, some bad elastic and her Hello Kitty sewing machine, Wong sewed herself a face mask, and on March 20 she posted on Facebook that she was taking requests for more. That was the beginning of Wong’s Auntie Sewing Squad (ASS for short), a nationwide network of nearly 800 volunteers who over the next 17 months would make and distribute nearly 400,000 masks as well as hundreds of thousands of other medical supplies to farmworkers, Indian reservations, immigrants at the border and more.

That was also the inspiration for Wong’s latest solo play, “Kristina Wong, Sweatshop Overlord,” which premiered last fall in New York and was a finalist for the 2022 Pulitzer Prize for Drama. It opens Tuesday at La Jolla Playhouse.