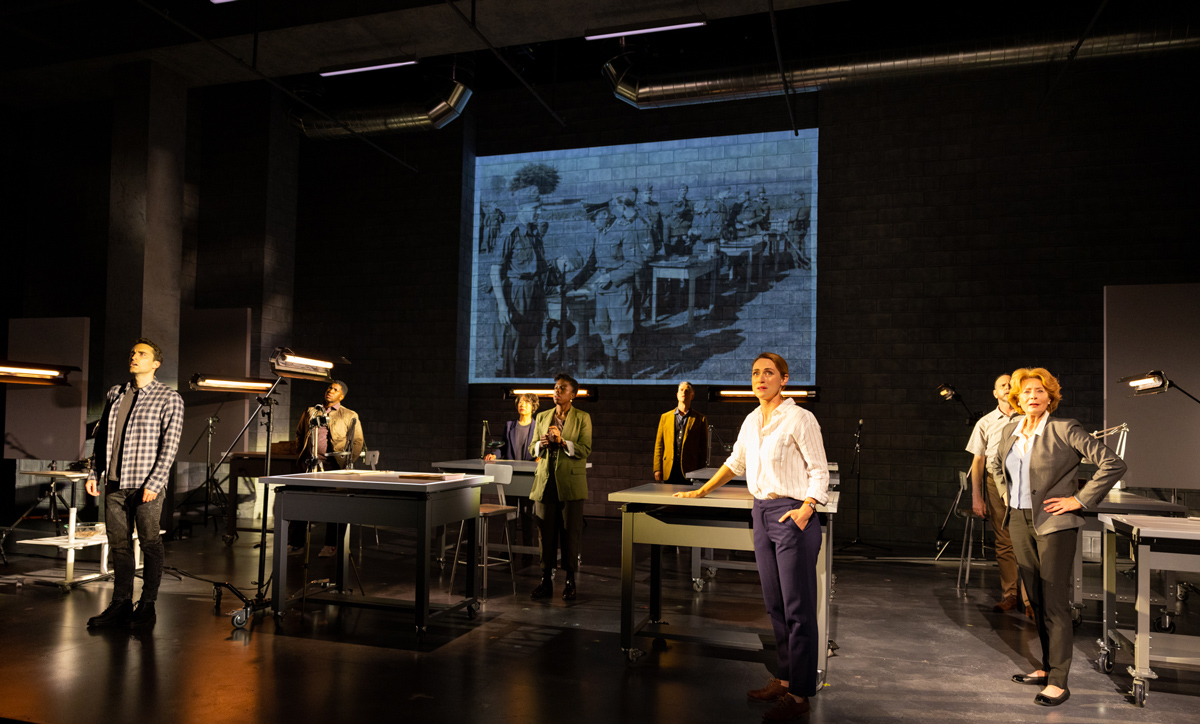 Review: The banality of evil is central to a disturbingly resonant ‘Here There Are Blueberries’

“Here There Are Blueberries,” a play conceived and directed by Moisés Kaufman, tells the true story of an album of photographs that was sent to the U.S. Holocaust Memorial Museum in 2007.

The sender, a retired United States Army intelligence officer, found the album shortly after the war when he was living in Frankfurt, Germany. Nearing the end of his life, he believed the collection of photos from the Auschwitz concentration camp would be of historical interest. He was right, though it took some impressive detective work to reveal the value of what had been gathering dust in his archives for more than 60 years.

The play, which is having its world premiere at La Jolla Playhouse in a co-production with Tectonic Theatre Project, meditates on the many aspects of this disturbingly resonant story. Kaufman, the artistic director of Tectonic, and Amanda Gronich, a charter member of the company, co-wrote the script, which hews to the factual record while taking artistic liberties for the sake of dramatic clarity, economy and force.

The authors worked closely together on “The Laramie Project,” the groundbreaking nonfiction drama about the 1998 murder of gay University of Wyoming student Matthew Shepard. In “Here There Are Blueberries,” they tackle with courage and compassion the nature of murderous complicity on an unfathomable scale.

The story of the album is told from the vantage of the researchers who are piecing together information about the figures in the photos. The images, which are integral to the play, received so much attention when the news broke of their discovery that the museum’s website crashed.

Rebecca Erbelding (Elizabeth Stahlmann), an archivist at the museum, is initially skeptical of the claim that the photos are from Auschwitz when she’s first contacted by the donor. But after the album arrives, her attention is seized by a photo of Josef Mengele, one of the most depraved doctors of the Third Reich.

Previously, she explains, there had been no photographic evidence of Mengele at Auschwitz. Sensing the import of what was sent to her, she consults with a senior colleague.

A closer look at the photos by Judy Cohen (Rosina Reynolds), the director of the museum’s photographic collection, reveals a central figure in upholding the Nazi regime, Rudolf Höss. As Judy explains, “He built Auschwitz, and he ran it for years. He’s responsible for everything we think of as the camp: the barracks, the guard towers, the electrified fences, the extermination infrastructure … the whole organization.”

The album contains 116 photos with captions in German. The figures in the photos aren’t the prisoners but the people who ran the camp. Ordinary Germans, bonding together on the job, taking part in official ceremonies and enjoying recreational activities. The pictures provide a haunting illustration of what the philosopher Hannah Arendt famously called “the banality of evil.”

Photographic analysis augmented by ingenious research leads to the conclusion that the album belonged to Karl Höcker (Scott Barrow). A former bank teller, he rose to become a top administrator of Auschwitz — motivated, it seems, not by ideology but by the career opportunism of a petty bureaucrat.

Kaufman and Gronich deliberate on the many historical and moral questions that the real-life Rebecca and her colleagues grappled with as they closely studied the album. The more information they uncover, the more they struggle to understand the reality before them.

There is particular interest in a lodge that was built to provide a place for Nazi officers to vacation with their families to relieve job stress. This rustic leisure stands in stark contrast to the grim reality of the crematoria blowing smoke a few miles away.

A photo of women who worked in the camp as telephone, telegraph and radio operators captures them doing calisthenics with a look of relaxed bonhomie. Another shows them on a bridge in uniform exuberantly gathered as a man plays the accordion.

What did these people know about their place of employment? Specialization of labor allowed the workers to deny any knowledge of what was happening at Auschwitz. But as the researchers reveal, their ignorance was a convenient ruse.

A photo of Höcker at the lodge serving blueberries to female personnel (the caption provides the play’s title) is all the more horrifying for seeming so serene. The smiling faces suggest a utopia, but these are the managers and custodians of a living hell.

The United States Holocaust Memorial Museum was set up to remember the victims of the Nazi genocide. The staff is therefore forced to examine whether it is right to devote space to a collection of photos of perpetrators.

How should history be recalled? Should those who enabled atrocities have their names and faces blotted from the record? Ultimately, the museum staff deems it necessary to call attention to the way everyday citizens were corrupted by ideology, self-interest and a conspiracy of lies. How else can humanity be prevented from falling again into darkness?

“Here There Are Blueberries” extends itself perhaps too far in following the stories of descendants of Nazis coming to terms with their heritage. The structure of the play assumes the elasticity of a PowerPoint presentation, scattering focus.

Although this is not a verbatim drama, interviews are the source of the dramatic material. The editing hasn’t yet reached its optimal form. But the strength of the work is less in the dramatic writing than in the creation of a contemplative theatrical space.

Kaufman, who’s the son of a Holocaust survivor, infuses his company with a quiet moral purpose that had me shedding tears for much of the production’s 90-minute running time. An ensemble of eight, with each actor taking on multiple roles, majestically balances thought and feeling.

Photographs are projected onto Derek McLane’s set, which moves from the museum’s research office into a realm of fluid memory. The pictures are brought to life aurally as well as visually, with cast members contributing to the soundscape. But what is most powerful is the way silence is interwoven. Kaufman conducts this impeccable production with symphonic subtlety.

The sincerity of this collective effort powerfully communicates the grave significance of this trove of artifacts almost lost to time. History is once again knocking. Will we unstop our ears and learn from the mistakes of the past?