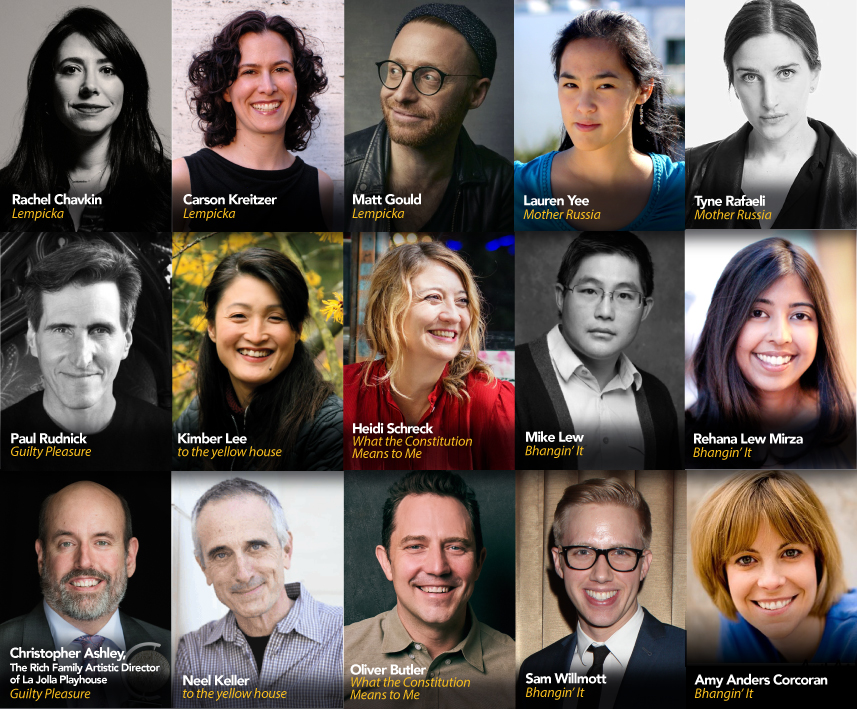 Including a world-premiere play directed by Christopher Ashley

Amid the violence of the Russian Revolution, a young painter named Tamara de Lempicka and her aristocrat husband are forced to abandon their luxurious lifestyle and flee to the dubious safety of Paris. Relying on raw talent and relentless ambition, Tamara claws her way from penniless refugee to in-demand portraitist, earning a place among Parisian high society. Her world is upended once again when she meets Rafaela, a free spirit from the city slums, who introduces Tamara to a new world of decadence and passion. Torn between her new muse and her husband, and fighting to leave her mark on an ever-changing world, Tamara must discover the depths of her own strength to survive. Spanning decades of political turmoil and told through a thrilling, pop-infused score, Lempicka boldly explores the contradictions of a world in crisis, a woman ahead of her era, and an artist whose time has finally come. The world premiere of Lempicka was originally produced in July 2018 by the Williamstown Theatre Festival; Mandy Greenfield, Artistic Director.

to the yellow house

February 1886. Vincent Van Gogh is broke again. Trailing past-due notices and annoyed innkeepers, he arrives unexpectedly at his brother’s doorstep in Montmartre determined to make another fresh start. Caught in the colorful whirl of the Parisian art scene, he drinks too much, falls in love with the wrong woman, argues with everyone – and paints. Night and day he works to translate what he feels onto the canvas, relentlessly chasing a new form of expression that seems to be always around the next corner. But at what point in an endless cycle of failures do faith and persistence become delusion and foolishness? A meditation on love, art and not being popular.

What the Constitution Means to Me

Direct from Broadway, the 2019 Tony nominated Best Play and Pulitzer Prize finalist, What the Constitution Means to Me, by famed writer Heidi Schreck, joins us for a strictly limited engagement. This boundary-breaking play breathes new life into our Constitution and imagines how it will shape the next generation of Americans. Fifteen-year-old Heidi earned her college tuition by winning Constitutional debate competitions across the United States. In this hilarious, hopeful, and achingly human new play, she resurrects her teenage self in order to trace the profound relationship between four generations of women and the founding document that shaped their lives. Schreck’s timely and galvanizing play, directed by Oliver Butler, became a sensation off-Broadway last fall before transferring to Broadway where it received two Tony Award nominations among countless other accolades. See the play The New York Times hails as “not just the best play on Broadway, but also the most important.” Casting for What the Constitution Means to Me will be announced at a later date.

Welcome to St. Petersburg in the 1990s – the Berlin Wall has fallen, the Soviet Union has dissolved and opportunity abounds. But barely-competent government surveillance workers Euvgeny and Dmitri find themselves lost in their strange new world of glasnost, perestroika and McDonald’s. When they’re assigned to track Katya, a fallen pop-star with international allure, a love triangle, mistaken identities and some really shoddy espionage tactics are set in motion. It’s possible they might just make it out of this mess and find happiness – if only they could make a decision. A world-premiere comedy about the curse of freedom and having to choose between the Filet-o-Fish and the Big Mac.

Bethany’s life as a middle-aged, midwestern housewife comes to a crashing halt when her husband suddenly announces he’s leaving her for a woman named Kelli-Amber. Shell-shocked, Bethany finds solace in her secret hobby – penning gay erotic fiction. When her playful fantasies of lover pirates, star-crossed congressmen and clowns with marital issues become hugely popular online, she’s given a new outlook on life. But as her fame grows, will the risks of being a “slash fic” author lead to danger, happiness or the very best combination of both? Our own Christopher Ashley (Diana, Come From Away) directs this laugh-out-loud new comedy from Paul Rudnick (the upcoming The Devil Wears Prada musical, Jeffrey) about finding your calling in your guilty pleasure.

Winner of the 2019 Richard Rodgers Award, Bhangin’ It is an exhilarating new musical set in the high stakes world of intercollegiate competitive Bhangra: a traditional Punjabi folk dance morphed into a good ol’ American dance-off. Mary, a biracial college student, thinks she’s got all the right moves on the Bengal Tigers Bhangra team – but to teammate Preeti, she is just not “Indian enough.” When Mary is abruptly booted off the Tigers, she and her roommate Sunita put together a team whose only criteria for joining is a desire to dance. With Nationals coming up, can Mary whip this eclectic, ragtag group into shape to take on the competition? Brash, intoxicating and joyous, Bhangin’ It is a celebration of the traditions we inherit from yesterday and those we create for tomorrow.

All artists and programs subject to change.